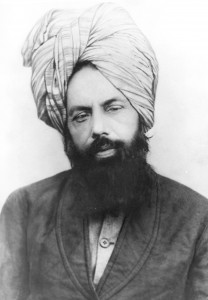 His Holiness Mirza Ghulam Ahmad, The Promised Messiah & Mahdi, Founder of the Ahmadiyya Movement in Islam

We at Rational Religion are Ahmadi Muslims. Islam Ahmadiyya is a revivalist movement within Islam that is seeking to return Muslims to the peaceful, rational teachings of true Islam. We believe that Islam is the final and complete religion from God, perfecting the messages of the spiritual teachers before them, be they Moses, Jesus, Krishna, Buddha, Socrates, Confucius, Lao Tzu, or countless others, peace be upon them.

Mirza Ghulam Ahmadpbuh, who founded the Ahmadiyya Muslim Community in 1889, claimed to be a Reformer for this age, a follower-Prophet subordinate to the Prophet Muhammadpbuh. Under divine direction, his mission was to restore rational beliefs to the religious and non-religious worlds, to fix the disconnect between creation and Creator in this age, and to foster the love of humanity in the hearts of all. In little over 100 years the community is all over the globe, with tens of millions of members, and ~1/2 million new converts each year.

Why has the Ahmadiyya message resonated so well when religion is largely on the retreat around the world? Perhaps because Ahmadi Muslims…

You can find out more about some of these true Islamic teachings here.

In this unique section of Rational Religion we’re going to showcase some of the teachings of the Ahmadiyya Community on topics relevant to the debate over God’s existence. We believe that the true teachings of Islam, as explained by Mirza Ghulam Ahmadpbuh provide a fresh perspective on all the issues agitating the mind of modern man.

NB: References from the Qur’an enumerate the ‘bismillah…’ primer to almost all chapters. Therefore, the verse numbers we provide may be +1 compared to Qur’ans using an alternative numbering system.

Find out more about the Ahmadiyya Muslim Community below: